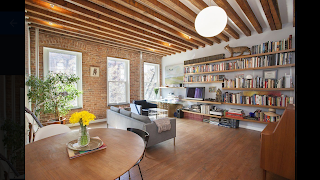 Posted by Back to the Old House at 4:00 PM No comments: Links to this post

If you're listing your apartment you better make sure your broker does this....

As you know some brokerage firms are no longer sending their listing feeds to streeteasy. However individual Brokers and Agents at these firms are free to upload their listings to the site. Absolutely make sure your broker/Agent is doing this.

Despite the disputes that some firms are having with streeteasy, they are still the most searched website for New York City real estate. If your home is not listed there, you're missing out on millions of eyeballs!

Posted by Back to the Old House at 8:26 PM No comments: Links to this post

Hello all and a belated happy New Year! I've been wanting to send out a little note with our opinions and interpretation of the current market. Initially, I thought that at best we would be seeing a flat Market with a bias moving to the buyer. However, by the third week of January, I realized that this was not going to be the case.

While everyone likes to echo that the $4m+ Market has been struggling along with new development, this doesn’t substantially affect well located and desirable units in regards to either issue. I would also note that while we're not seeing any deep discounts around newly developed units, we are seeing more willingness by sponsors to pay closing costs and perhaps throw in a few incentives, like storage.

On the upswing, the low end of the market (properties under $1M) is absolutely on fire. We've seen insane bidding activity on studios of all things; one very vanilla listing on the Upper East Side attracted 17 offers after the first open house! A lot of the energy that we’re seeing in the more modestly priced markets are also bleeding over to the under $3m two to three bedroom market that is showing modest strength as well. The best properties are attracting multiple bids fairly quickly, however, properties that are what could be described as average (regarding location and finishes) are behaving in a much more rational and predictable fashion.

An ironic effect of this normalcy evokes a strange, psychological trepidation in buyers when they place a bid and a normal negotiation takes place that resembles the mechanical grace of a wind-up clock. They want to know: did we pay too much? Is there something wrong with this place? When the resistance, assertiveness and general theatrics of negotiating are dissolved by reasonable behavior informed by rational signals, the lack of demonstrated struggle must seem sometimes too good to be true-- if the seller isn’t fighting for an advantage, they must already have it… right?

Instead of reacting to and dealing in hype, we judge each deal by its merits, using simple comparable analysis with recently sold properties in the building. We only contextualize and strengthen that empirical foundation with our opinion on the less tangible aspects of the purchase; practical things we know typically make homes salable. If everything adds up, we'll have a discussion and I’ll assure the buyers they are not making a mistake or missing any skeletons in the closet. Ultimately, you're buying a home that you're going to love, that's 50% of it in my book.

Buy or Rent….That is the Question

I recently saw another very lively discussion on Streeteasy.com involving the local pundits trying to figure out if buying is better than renting or vice versa. I remember a stat reported on in The Real Deal that showed the median return on a home purchase was less than 2% over the last 10 years. The returns of the equity markets are also referenced-- we all know who wins that race (however one of them won't keep the rain off your head :-).

I always wonder what the actual returns of the average Joe/Jane stock market are? Meaning, you can't assume everyone's matching the S&P 500 over long periods. Especially those that don't have professional guidance or at least a well-thought-out plan. I know that I, for one, had terrible returns until I found a professional and stuck to his advice. Now I'm doing well on all fronts: real estate, stocks and work. I've managed to find a very good balance and personally it feels really good to own real estate as part of my entire portfolio. And this is coming from someone who was once very much a renter.

I guess I'm just trying to say that you shouldn’t drive yourself crazy trying to figure out if you should buy a house or not. If your employment is steady, and after a purchase you'll still have a nice portfolio of other Investments, then buying a home can be a very good thing both emotionally and financially. Just go in with the mindset that there will be ups and downs to the market value of your property and that the real value is in holding on to it to grow along with your long term plans.

In our market, co-ops have definitely been a great stabilizer, assuring purchasers are financially sound. They keep a buyer honest. It's also just feels really good to buy/own your home! I know, I'm starting to sound like a cheerleader….

I understand why properties sell along with the process and structure of the system in which they sell. I know I'm going to sound like a broken record here, but it ain't rocket science.

All properties listed by rebny members go into the same database and are shared and found by Brokers in the same way regardless of who you list with. Price, location, condition along with proper staging, quality photographs and a well-informed broker are the big drivers in that order.

We recently put our newest listing, 88 Jane Street into contract after 1 week. While I'm a True Believer that the market will set the price rationally for the most part, it's very important to Initially list it correctly and not wind up having to play catch-up 3 months later. You have to adopt a survivability mindset and be prepared to pivot quickly if your expectations and the markets are not lining up. You need to have a broker who you can trust will be giving you good advice with your best interests at heart, not his. Someone that's not afraid to tell you the truth or at least his opinion whether you're going to like it or not.

If you're considering selling your home or know someone that is, please give me a call so we can discuss the process in much greater detail. Essentially, though we provide a full-service listing experience with a top Line commission of 3.75%, 2.5% of that is going to the co-broker. I recently had a client tell me, ‘well we were only going to save $10K with you so we figured why not list with___________.’ The good news is it sold in 2 weeks, the bad news is that it cost them an extra $10K. Would you just leave $10,000 sitting out on a bench in New York City and walk away from it?

Another thing that's important to remember is that it's the buy-side agent that does 98% of the selling-- not the listing agent. The listing agent assists with the process of getting your property to Market. However, while listing is certainly a very important aspect of the process, the buyer is specifically coming to you because your listing is on streeteasy or their broker made them aware of the information. Something to think about….

To Sum this up I want to thank everyone for putting their trust in our group by either working with us directly or referring a friend or co-worker. It's been an absolute pleasure to assist all of you and hand out over $1,000,000 in rebates last year. The last month has been extremely hectic and busy, particularly as the market continues to gain momentum as we head into Spring. However we do believe there are opportunities to make a fair deal for those who would like to purchase a home. While there are a lot of boogeymen out there that could certainly upset the apple cart, so far we continue to march forward at a solid pace.

The current New York City real estate market could be described as rational, perhaps even somewhat normal in my opinion. The big question mark now is ‘what happens as rates climb?’ Perhaps part of this new buying strength is that very fear, that money is going to get more expensive. So far though, rising rates have not derailed the New York City real estate market. Personally I think it'll take more than somewhat higher rates to throw this market into a tailspin.

Bottom line: it's just been a very resilient market, there's nothing else to say. First it was going to be the lack of foreign buyers to kill it, nope. Then the influx of new developments, nope. The new tax law, nope. Now the hot topic is interest rates and those are certainly a valid concern. That said, rates are still historically very, very low. So buy something you love and can afford and live in it! And if buying isn't for you there are plenty of rental opportunities in New York City.

Posted by Back to the Old House at 3:18 PM No comments: Links to this post

http://www.theburkhardtgroup.com/88-jane-street-1re
From the seller: "Thanks, guys.  you’re pro’s and will receive our recommendations!"
It was an absolute pleasure working with these two wonderful people!
Posted by Back to the Old House at 12:17 PM No comments: Links to this post