Fritz Frigan's Open House Report: light at the end of the tunnel!


Wow what a difference a week makes! We also had a very busy open house at 21 East 22nd Street #4c with 9 groups on Sunday and about the same for the weekday open house. I'm also happy to report our other listings have seen a 50%+ increase in inquiries and traffic.

Look at that open house on South Portland Street in Fort Greene, 80 people! This is what I talked about in a previous blog, two bedrooms under 1.5M in Brooklyn are on fire!

So it's quite the fragmented market; if you have a desirable unit and price correctly, you could see some 2015 style action. So far post Labor Day has been very busy for us on both the listing side and the buy side. We currently have a strong offer on one of our listings, the number of groups coming back for the second and third time on our other listings has also been very strong. Three recent signed contracts on the buy side and two accepted offers last week.

Initial signs point to it being a fairly active Fall with the bias favoring buyers.

Thank you Fritz for the open house reports!

'The numbers are in. Wow! What a change from last week. Can we say “The buyers are back!”? Well, at least by what happened this past weekend, yes the buyers came out in droves! We witnessed 39% spike in the attendance at open houses this past weekend. On average 4.20 per open house, compared to 3.02 the weekend before. And compare that to measly attendance in July and August when average attendance rarely crossed over 3. Amazing! Here is the dataset. Will it continue? Who knows. Keep on sending your data and we’ll see if the next weekend will continue with these numbers….. Let’s go into details:

We received numbers from some open houses that we have not seen in months. 80 parties came to open house in Brooklyn, hosted by Pascal Blacque-Belair of Elliman. And 42 parties were reported by Lisa Tregnaghi Garden of Halstead. I could not believe the numbers so I emailed them both. And they both confirmed. Lisa said “there were 42 parties, but total of 100 people+ at the open house”! Here is from Pascale: “Yes 80 is accurate. Have never seen this in 20 years. A 4th floor walk up to boot.”. Three open houses had 20+ attendees and 26 open houses had 10+ visitors

We received record number of entries – 285! The word is spreading, keep on encouraging your colleagues to participate. There were 50 open houses with zero traffic, which is 17.5% - there goes my theory that busy weekend is when zero open houses are 14% or less. Another important number: public open houses average was 4.54 – it is By Appointment Only open houses that brought the average down to 4.20. By Appointment Only Open Houses had just 1.80 attendance on average.

·        Manhattan – 29% increase in traffic overall from last week. 3.62 compared to 2.81 the weekend before. Very busy on Upper West Side, Washington Heights, East Village, Chelsea, Harlem, Flatiron (small sample). It was very slow in Midtown East and Midtown West. Upper East Side well below the average with 2.79.

·        Brooklyn – with strong 6.68 Brooklyn saw 36% increase in traffic from the week before. Very busy in Brooklyn Heights and Brooklyn Other Areas, the rest was below otherwise very strong average. We got 41 replies from Brooklyn – keep up the pace Brooklyn brokers!

·        Queens – Queens saw 105% increase in traffic (but beware of small sample sizes). We received just 9 replies, the week before we had 10. Super busy at one open house in Forest Hills with 18 attendees. LIC was relatively slow, and other Queens areas were OK with 4.80 on average.

·        Condition – Interesting that “Excellent/Mint” condition commanded such premium over others: 4.83 on average in properties described as “Excellent/Mint”. Use it!!

·        First Open House – I cannot emphasize enough of importance of pricing your properties right as you bring them to the market. This past weekend First Open House commanded 319% premium in traffic vs. “old” open houses. 61 properties had their first open house, which supports idea that many agents were waiting for after Labor Day to start the marketing.

Some agents suggested I add “condop” as an ownership type. Condops are truly co-ops, just with transfer of ownership similar to condos, hence pretty good for investors. Let me know what you think – if I get many votes with “YES” to include “condops” as a separate category, I will do it.

I also received requests to include more sub-markets in Brooklyn and the Bronx. Let me know what you think. My concern is that more I divide the areas, less replies I get per each market – and the stats are no longer very reliable. But happy to do it, if I get decent amount of replies. “Prospect Heights” and “Fort Green” was mentioned for Brooklyn, “Inwood” for Manhattan and “South Bronx” in the Bronx.

34% or 97 responses came from agents and brokers outside Halstead. I think this is great news – spread the word! The goal is to get 10% participation from New York City open houses.

Best of luck at your open house next week!


Posted by Back to the Old House at 9:58 PM No comments: Links to this post

Price Reduced for this Beautiful 'A' Line at the Link!

Posted by Back to the Old House at 10:01 AM No comments: Links to this post

A great price point for a convertible, 2 bedroom loft home! 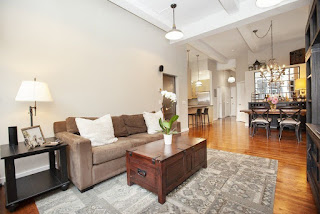 Fully renovated and in excellent condition, this apartment features 11.5' ceilings and great light through its extra large windows. At approximately 1000 square feet this generously proportioned home is open and airy with a huge living area equipped with custom lighting, and separate dining area across from an open kitchen – which features custom cabinetry, double length drawers, Italian glass tiles and Bosch and Viking appliances. The 21' long master bedroom has a massive walk-in closet along with a built-in custom wood vanity cabinet for even more storage. The large home office with a full-size closet is currently used as a spacious nursery but can easily fit a queen bed – or convert to a large office/guestroom. There is extra hidden storage located above the front and home office closets. Simply said, there is room-to-roam in this spacious and inviting home in a fantastic building & location!
Posted by Back to the Old House at 12:03 PM No comments: Links to this post