Off to a Rough Start!

Happy new year! I spent the last 8 days in the beautiful city of Alamos, Mexico where my daughter was married in her Grandfathers home. If you want to explore a beautiful, historic colonial city in Mexico...start here.

It would appear that the softening in the market we experienced starting in August will be the continued theme. According to Streeteasy there has been a substantial decline in inventory. They tell a story of homes being sold quicker and closer to ask over the last quarter, that has been our experience as well. However it's been because it has been much easier to get to home plate for buyers. After being beat up for the past several years, paying ask or close to it was perfectly acceptable. The perk was not having to compete against many other bidders.

We'll know more come the end of the month.... 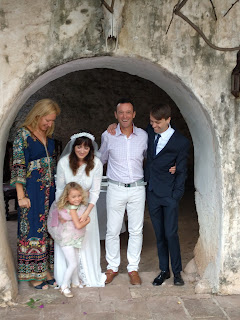 From left: My wife, daugter (Zoey), daughter (Kirtana), me and Lance
Posted by Back to the Old House at 6:19 PM